This is a guest post by Leigh Gibson, a technology leader at ANZ. ANZ is a proud sponsor of SheStarts and Leigh joined the SheStarts team in San Francisco where they learned more about ‘going global’.

Read what Leigh has noticed about technical women, unconscious bias and imposter syndrome.

The gender imbalance in engineering teams is generally known – and even as a woman who has worked in in tech for over 20 years, I am at a loss to understand or explain it fully.

I’ve been working in technical or IT based roles since the 90s. Although things are changing gradually, I still have to work hard to lift women up in tech roles, as women hold just 31% of IT roles in Australia.

I know many women who are deeply technical, and I know even more women who are incredibly intelligent and interested in the outcomes tech can create. Often these amazing women are put off by what they hear about the industry culture.

It was easy to identify some unconscious bias displayed towards Dr Annie McAuley, founder of TalkiPlay, as she’s a softly spoken, fashionable, friendly women. When observing conversations with Dr Annie and a variety of different tech industry people in San Francisco, some would start the conversation assuming that Annie had a tech partner or that the technology was not as sophisticated as it appeared.

In fact, every founder in the SheStarts cohort classifies themselves as ‘non-technical’.

Although after spending a week with each of them and getting to know them, I would disagree.

These female founders may not have studied IT, but they are generally taking a structured and scientific approach to the way they are developing their tech based businesses. And it’s been a privilege to meet them, advise them and travel with them in San Francisco.

Waiting to board flight to SF to join @BlueChilliGroup @shestarts US delegation this week. Proud to represent @ANZ_AU since we are one of the key sponsors, supporting female entrepreneurs with world changing business ideas! See you soon @nic_hazell ✈️ pic.twitter.com/81yFs00Pp3

One Founder Starting with Small Steps

Even though Dr Annie considers herself non-technical, she holds a doctorate of molecular biology and has built patented technology that creates a ‘talking house’.

Dr Annie taught herself to code so she could build a mobile app, and bought a soldering iron to create NFC beacons for her first prototype. Annie made the tech for her daughter who had a speech delay, and got the results she was seeking, because her daughter’s speech improved quickly.

Most surprisingly, Dr Annie initially had no intention of taking it to market or developing it further! Colleagues and friends encouraged her to investigate commercial applications.

What I love about this story is that Dr Annie developed tech without considering the challenges.

She didn’t limit herself. She just got on with the build. More seasoned engineers may have considered the challenge too difficult to attempt.

“We know play is vital for kids, but is it valuable for parents?” @annie_mcauley considers being a parent her most valuable role. Annie’s kids are her ‘why’ & her reason for creating #TalkiPlay. Read more in this touching letter to her young daughter.https://t.co/9FkABXq10k pic.twitter.com/5Nd47K774j

All of the SheStarts founders are breaking the traditional ‘startup founder’ mould.

Although they might consider themselves ‘non-technical’, they have a wealth of knowledge and experience:

Imposter syndrome is rife and it impacts everyone.

There was talk during a San Francisco breakfast panel at Juvo about imposter syndrome.

Building a business is tricky enough without talking yourself down. Be present and get on with what you need to do.

Put your fear aside and persist.

“People are more complex than technology systems & deserve to be treated that way. They should be invited into an opportunity of growth & have space to florish.” @megbear speaks to the huge potential of hiring people for their potential of what’s possible at @juvo_mobile 🚀

At one point when I was having a meal with the founders, there was talk about what life would be like running these businesses after the SheStarts accelerator program is over. As a former founder myself, I was a bit quiet and a couple of people asked me why.

I see a lot of parallels with first-time founders and first-time expectant mothers.

For founders, their businesses have started. They are motivated, happy, excited and full of optimism about what the future holds! 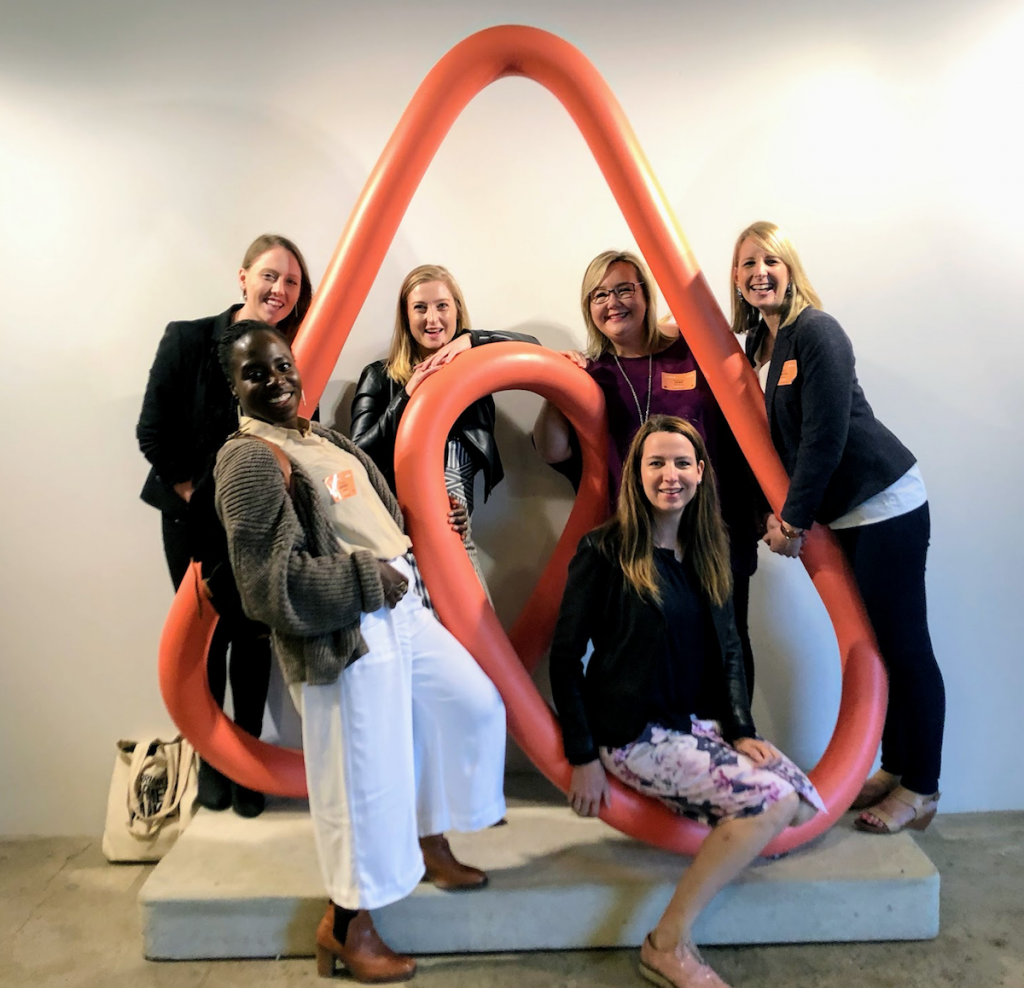 It takes time to grow your startup baby – the unicorn AirBnb has been in operation for over a decade! Pictured from left: three founders, Laura, Andrèz and Annie with Jane from MYOB, Leigh from ANZ and Nicola from SheStarts.

I know from experience that there will be discomfort, pain and a time-consuming, noisy business ‘baby’ soon that will try to take over their entire life.

In the moment of predicting startup life after SheStarts, I didn’t want to spoil the happiness or excitement. Because I also know that the discomfort is worth it and that there is enormous benefit to be derived. Experienced mothers know this too.

They know that a 6 year old is better behaved and has the maturity to look after their basic needs. They know that toddlers can be unpredictable and remarkable in equal measure.

For startups and parents, it’s an amazing and tough journey – and most of all, worth it.

It takes time and effort to see rewards.

The SheStarts program has an expansive impact. Not only do the founders in the cohort benefit from being in the BlueChilli accelerator program, but every person who hears their story is positively impacted too.

We met advisors in America that were happy to share their time, expertise and invaluable insights. Such as Adi Abili, the Managing Director of Accelerators at AngelHack, who was extremely approachable, generous and quickly identified improvements for pitches. When giving feedback, she was kind, direct, insightful and clearly useful. Lizzy Wilmarth from Cisco Meraki was another advisor who worked generously with our founders to help turn their pitches from ‘good’ to ‘amazing’.

It has been a pleasure to get to know the SheStarts founders, and I wish them and their businesses lots of success. I’m excited to see the impact and awareness that the team, the founders and the many advisors are going bring to the wider technical community.

Leigh is just one of the female leaders in Australia showing that women can excel in technical roles. Together with our SheStarts partners, we’re working to make sure we address the shortage of women in startups.