This post is part of our Women Behind the Program series, where we sit down with key leaders from the SheStarts community to talk about technology, gender equality and the personal journeys of these inspiring leaders and champions of change.

Meet Cheryl Gledhill: Feminist, startup junkie & head of product at BlueChilli. Cheryl talks about her obsession with startups, what it was like growing up in 1980s Australia and why it’s time to put the terms Girl-boss in the bin.

Looking back at your career, what single moment or decision helped you get to where you are today?

After high school I decided to defer uni for a year and got a job doing tech support for OzEmail, Australia’s first ISP (Internet service provider). My boss at the time asked, “Do you know how to make a website?” I shrugged and said, “No, but I can figure it out.” I’ve been in technology ever since. I truly love technology and all the potential it brings us humans. And also, the uni degree I deferred was Theatre Theory & Practice, and I’m not quite sure where I would have gone with that – but I suspect it wouldn’t have been anywhere near as exciting or fulfilling.

Who were your female role models growing up?

That’s a hard question, because I didn’t see myself anywhere I looked in 1980s Australia. Everyone on TV was blonde and sporty – there weren’t any female role models for a nerdy Asian girl. I didn’t discover Michelle Yeoh until my early 20s, but what a role model she is – an ex-ballet dancing beauty queen who can hold her own with Jackie Chan and be a star in both Hong Kong and Hollywood. I’m so glad media these days are less homogeneous, and our kids are growing up seeing representations of themselves on the big screen. 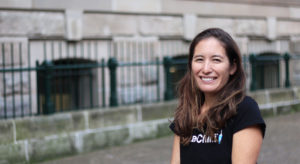 What excites you about working with startups and the innovation ecosystem?

The passion and the potential.

“Nobody in their right mind would go through the tough times in a startup if they didn’t truly believe in what they are doing.”

I love working with passionate people who want to solve a problem. They see that the world could be better and they’re not happy with the status quo. That’s what drives me.

Less than a quarter of Australia’s start-ups are led by women. Why is it so critical for the world to support more women-led startups?

Mark Pesce put it best in his article about Jefferey Epstein and the billionaire’s dinners:

“… We will need a long period – at least a generation – where women are favoured over men for funding and promotion. Some will call that unfair – as James Damore did at Google – but that’s precisely the reverse of the truth. The systematic discrimination exposed by the multitude of boys’ clubs operating in both the sciences and technology shouts out for a balancing of the scales as the only possible remedy.”

Women have never had a seat at the table, and this is to the world’s detriment. Think of all the amazing innovations we could have had if women had been given the same opportunities as men. Even the fact that we call them “women-led startups” – because “startups” by default are assumed to be male. I would love to see an equal number of women solving the problems they see in the world.

What is your personal motto?

I live by “done is better than perfect”. It’s better to get something out there to the world and use it, than to create the perfect “thing” that never sees the light of day.

“Good enough and useful is a whole lot better than perfect but never launched.”

It’s hard to put yourself out there, particularly when you’ve created something that you feel like you need to apologise for because you know you’re capable of better. 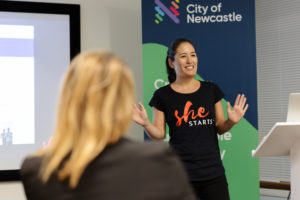 How do you hope SheStarts will change the world?

I hope one day we don’t need SheStarts. Instead, investors will have realised the value they’ve been missing for so long and will be funding women-led startups the way they do male-led startups. My hope is that by the time my daughter (4-years-old) is working, we don’t have to have terms like Lady-boss, Girl-boss or Women-led startups – she’ll just be the boss, and run a startup. End of story.

What has been the most memorable moment with SheStarts?

Watching the founders grow from “women with an idea” to “tech founder CEOs” is pretty incredible. I love watching tech get demystified – for whatever reasons in the 70s and 80s computers became this thing that boys played with and girls didn’t. To flip that around and watch women realise “we belong here too” is really amazing.

I personally get really attached to every cohort. It makes sense: we work so closely together for 6 months, and we end up knowing each other’s life stories – kids and relationships and life outside startup life. Their journey becomes our journey. I’m still in regular conversations with a lot of our alumni; they’re all such amazing women.

Which SheStarts alumni have personally resonated the most with you?

So hard to choose! Laura from Theratrak will always have a place in my heart, because she’s solving a problem I experienced on a regular basis: that when parents leave an OT’s office they instantly forget what exercises they are supposed to do with their child. Annie from TalkiPlay is a close second, because she is solving the problem of speech delays in children, I wish her product had existed when I needed it for my kids. 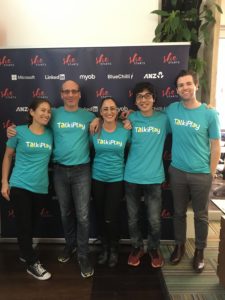 Thinking about how you’ll pull together the big vision can often seem impossible, and I think it stops a lot of people from trying. What helps me is going against all conventional wisdom of thinking big vision – it’s about thinking as small as you can.

“You know the best way to eat an elephant? One bite at a time.”

Break the idea down into manageable chunks. You have a bold idea for a startup: do you have to get everything right before you launch it to the world? Or, can you start with a small bite – test the waters with a Facebook ad or a message in a social media group to validate your idea. Go as far as you can without code: use typeform, airtable, wordpress. There is so much no-code software out there, so take it as far as you can without hiring a developer (if you’re non technical). And once you’re spending all day manually concierging requests, then look into how you’ll scale.

Getting your first 100 users is the hardest part. Concentrate on that first, and the rest will follow. You’re eating the elephant by then.

Cheryl Gledhill is BlueChilli’s Head of Product, helping SheStarts founders define, validate and build their products to reach product-market fit. She has spent the last 20 years working with startups and corporates in the mobile and digital space in Australia and the US. From Australia’s first ISP and Richard Branson’s Virgin Group to running a Mobile Design agency in Seattle, Cheryl is passionate about creating amazing products that resonate with users, spark delight and provoke thought.