It has been a pretty humbling and proud experience watching SheStarts alumni achieve major milestones since the close of the program. Anna from BanjoMaps has since secured a pilot program with the University of Technology Sydney (UTS) to begin early testing of BanjoMaps in a real world environment before public launch.

We sat down with Anna to ask how the pilot came about and what’s next for the future of BanjoMaps.

FROM PITCH TO PILOT

Having worked at UTS for a number of years, I had already built a strong connection with the university before the SheStarts program. Also as UTS has always had a very strong commitment to entrepreneurship, accessibility and technology, when the time came to partner, it came quite naturally. Overall, they have been incredibly supportive of me doing the SheStarts program.

The plans for a pilot with them had been in place for a while, so now it’s incredibly exciting to now see everything in action. We were very lucky to have a champion for the project in top management. This made developing and negotiating the pilot and installation easier. We did however, hit a certain amount of resistance with others saying it was going to be too hard to achieve, or that it would be too much work.

In short, the pilot involves using our technology to guide users to key points in Building 11 within the UTS campus. The setup has involved installing a network of 70 iBeacons on two floors of the building across strategic locations along the walls and ceilings. The aim is to begin testing the accuracy and operation of the beacons in a larger public space and use this information to further develop and refine the user experience.

To be able to go out to a large space such as UTS means we are able to get better data than any of our preliminary tests so far. What we were able to originally do within the BlueChilli offices was a proof of concept. At the time we weren’t even sure if building this technology would be possible! It was such a breakthrough to get it working across a couple of office levels but to be able to go out on this scale is incredible.

I’m incredibly excited to have lots of people try out the BanjoMaps navigation system in the coming weeks! 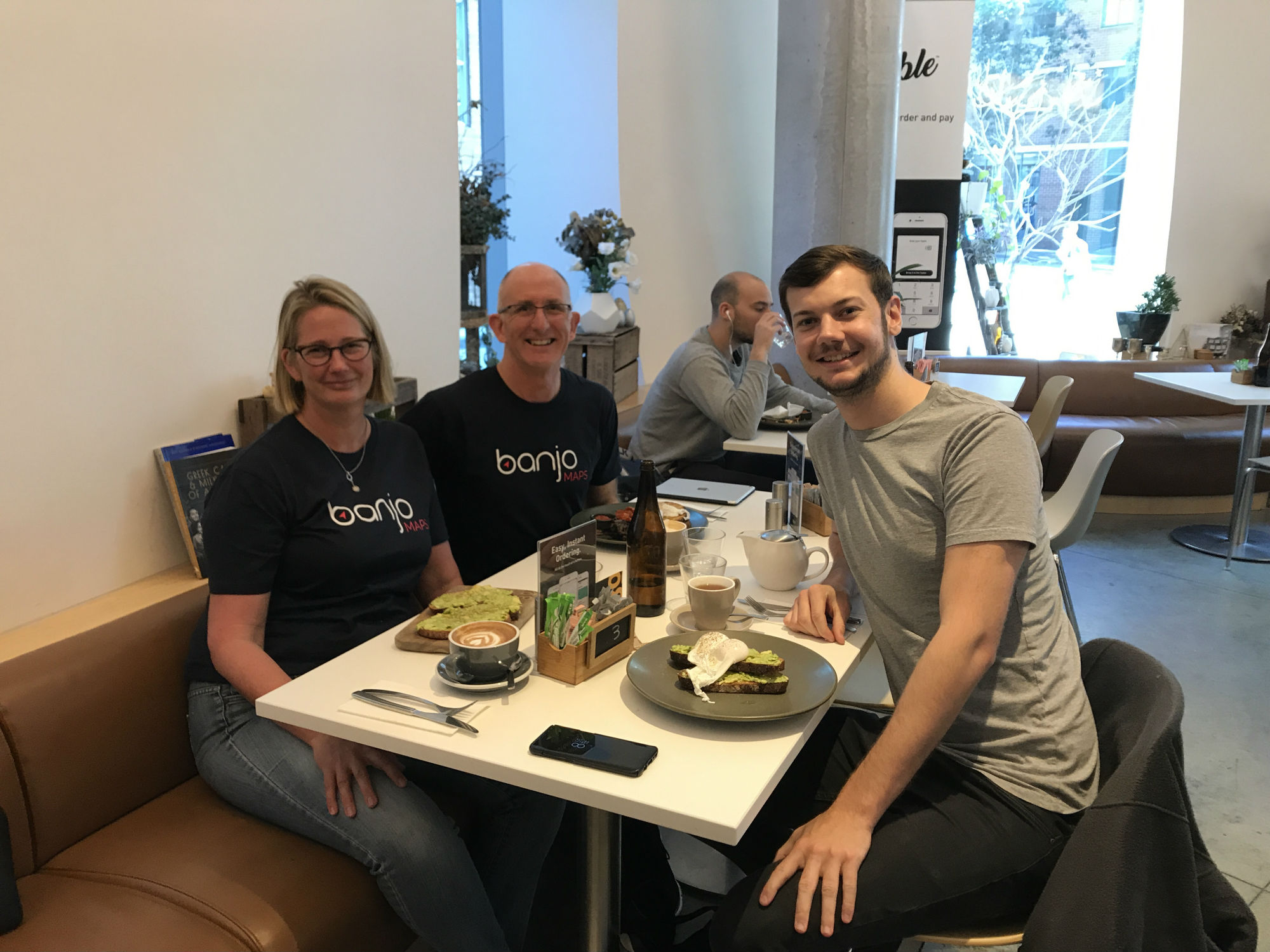 IT ALL STARTS WITH ONE

We’ve since negotiated a paid pilot with ANZ – one of the partners of the SheStarts program. The program gave us the amazing opportunity to pitch and talk to them quite easily. It’s wonderful to see how willing big organisations are to support and try new technology like this. The fact that it is a paid pilot not only means it will provide further funding for development but is also a good indicator of commitment from them and will help greatly with progression of the UX and UI design.

The ANZ program will be quite different to UTS, which is in a large public area. The two environments we are piloting in, will be in an ANZ bank branch and an office floor. Since the ANZ office space is a standard height office space as opposed to the large atrium at UTS this will likely expose different findings and technical hurdles for us to solve.

It’s exciting and frustrating that there are, and always will be teething issues. We’re not at results stage with our pilot just yet, but we’ve been documenting things as they come and collecting little learnings. We’ve hit a couple speed bumps but we will get there.

We uncovered one of these learnings when performing a “walkthrough” with guide dogs at UTS. A “walkthrough” is an exercise where you follow a mobility specialist and someone with visual impairment, to see how they would navigate a space.

We uncovered a major accessibility issue for vision impaired users when it came to accessing bathrooms. For vision impaired users with a guide dog, toilets with a wider doorway, such as wheelchair accessible bathrooms, are preferable. It may not be something most people think of, but the way these types of bathroom indicate if they are occupied is usually via a coloured light (either green or red) – which is utterly useless if you are visually impaired. Once inside, the same light would then indicate whether or not the door has been successfully locked. This makes these types of bathrooms impractical. Dogs can’t see colour so you can’t even teach a guide dog to assist in these situations.

Not many people think this kind of accessibility through. Hardly any walkthroughs are with people who are vision impaired. This is where BanjoMaps can be of great help. The end goal would to be able to get RFIDs inside and let users know if the door is locked or unlocked but even in the meantime we would be able to configure BanjoMaps to find user the next best option.

“Not many people think this kind of accessibility through. Hardly any walkthroughs are with people who are vision impaired.”

In this way, instead of directing users to impractical wheelchair accessible toilets, we could navigate users to ambulant toilets which would still have wider walkways and cubicles than standard bathrooms but would have more tactile door mechanisms.

It’s been incredible exciting to be nominated for a Women’s Agenda Award. I was worried they had accidentally chosen the wrong person! I was nominated and then shortlisted for the Emerging Entrepreneur of the Year category. Although I didn’t end up winning the ward, which of course is a little disappointing, it was nonetheless phenomenal to be recognised so early on for my progress thus far. In reality BanjoMaps was only started in January 2017!

In the end the whole process was a still a win-win for me. Part of the selection process involved shortlisted candidates attending face-to-face interviews with a judging panel. I was lucky enough to be interviewed by Pip Marlow, the ex-Managing Director of Microsoft who expressed interest in what I what BanjoMaps is trying to achieve. She has since been able to connect me with people within Microsoft who are working in the accessibility space for partnership opportunities.

BanjoMaps is also up for a couple awards next week. We are finalists for the Service Science Society of Australia – Service Innovation Award, and the Committee for Sydney Smart City Awards, which are actually on the same night! It’s nice to have external validation and it’s great for our marketing. I’ve found getting across the legitimacy of the product is very important in the startup community to assist in gaining further investment and partners.

If you asked ask two years ago if I’d be doing what I’m doing now, I’d be laughing at you! I honestly believed when applying for SheStarts, that the concept of BanjoMaps was “just an idea”. So the whole journey so far has been quite surprising.

“If you asked ask two years ago if I’d be doing what I’m doing now, I’d be laughing at you!”

With SheStarts 2 applications opening soon, I encourage all women with bold tech ideas to just go for it! Having gone through the bootcamp experience, which was pretty full on, I realise how much time I spent doing the customer interviews. So my one top tip for those who have time to work on their idea, would be to do those customer interviews sooner rather than later. I’ve noted this is where a lot of early pivots arise and should help you get to the best version of your idea.

Next steps for us are to begin raising capital. By Christmas 2018, customers will hopefully be doing Christmas shopping with BanjoMaps on their phone in their hands!

We love the huge dreams and goals Anna has set for herself and BanjoMaps. With new programs rolling out over the next six months, we have no doubt in her ability to achieve each and every one of them.

Make sure you head to our Facebook, Twitter or Instagram for all the info and news as we continue to follow the success of our founders and updates regarding the next cohort for SheStarts!